Showing posts from April, 2013
Show All

BB BlackDog and The Scurvey Pirates 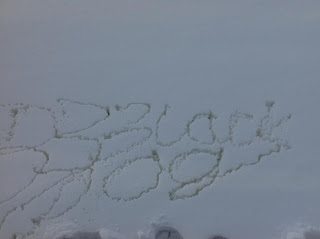 BB are back in Germany now, in readiness for "Aethercircus", the big North German Steampunk Festival at Stade, just North of Hamburg. Apart from catching up with Sven, to check  on the progress of the new album, they will be playing a couple of warm up gigs in Holstein. The first one is this coming Saturday, April 27th at "The Cafe Coma" in Bad Segeberg, where they are teaming up with Sven's band "Skorbut", the infamous Baltic Sea Pirates. The following Thursday they play "The Hexenkessel" at Oldenberg in Holstein, the next town West of Axel's native Heringsdorf. From then on it is a month of festival appearances, starting with the aforementioned Aethercircus. http://www.blogger.com/blogger.g?blogID=3904077062961575114#editor/target=post;postID=711760726501938027;onPublishedMenu=allposts;onClosedMenu=allposts;postNum=0;src=link A hectic week of travel ensues after the festival, with the long haul back to Derbyshire to pick up the "B…
Post a Comment
Read more 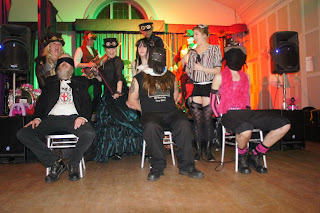 BB as they have never been sen before. Thanks to Giles Warhurst for the picture.

A couple of local shows this weekend, to get back into the groove, before festival season kicks in.

Friday (April 19th)  it is back to The Fishpond, Matlock Bath. This time they are downstairs in the bar and will be airing a longer set than last weekend.

On Saturday they play The Bulls Head at Belper Lane End, Dale's real home venue. It is a little way out of Belper itself, a reasonable cab ride though or walk (check back to December 13th blog for details).

Both gigs are free entry and will start around 8pm.

A big Happy First Anniversary with the band to Mike this week.

Hope you caught the  big announcement this week, launching "The Steampunk Experience" at AltFest 2014 if not have a look at the events page at https://www.facebook.com/BBBLACKDOG?ref=ts&fref=ts#!/events/239384216202258/ or the AltFest ad https://alt-fest.com/index.php/component/k2/i…
Post a Comment
Read more 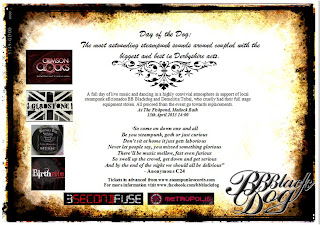 " The Day Of The Dog" is almost upon us and the band are looking forwards to playing live again.

It has been sometime since their last outing and indeed this will be, only the fourth performance  of 2013.

As most of you will be aware, last month was spent in Germany, progressing their recordings.

With Sven at the helm of getting the records down and proving a hard task master, Dale and Axel have found the time, whilst fairly intesive to be highly productive.

Indeed extremely productive, with enough material, some older songs recorded and well into double figures of new songs written and recorded for No. 2 and probably 3 and 4.

Additionally there are a two collaborations, one with Proffesor Elemental and one with Lord Montague Jaques Fromage, which will hopefully see the light of day soon. 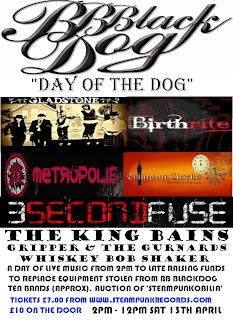 Well another fine plan, shot down in flames. This week's blog was supposed to be bringing some word of mouth updates, however the meet up with Dale has had to postponed. A definite date with Dale, possibly Axel and some fine local ales on Sunday, so if anything coherent is said or remembered we will bring it to you next week.

That being the case, it appears to makes sense of bringing the "Day Of The Dog" details forwards.

So here is what is happening next Saturday, April 13th at The Fishpond in Matlock Bath.

It is probably worth stressing that the bill has no hierarchy as such, merely times to suit.

Doors are open from 1pm

The show starts at 2pm when "Whiskey Bob Shaker" takes to the stage. It is well worth being there from the start to catch "Bob". For those not in the know, he creates a beguiling feel to his songs and his periodic use of cajon loop defies the depth of sound that…
1 comment
Read more
More posts